All that is really necessary for the survival of the fittest, it seems, is an interest in life, good, bad or peculiar. 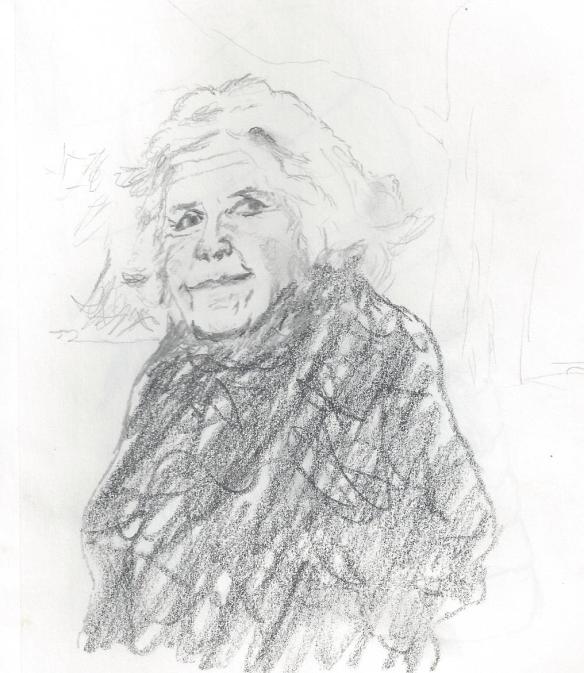 Recently, I set out for a short stroll through Twitter. I follow too many people, for too many reasons I’ve long since forgotten. I’ve made lists to filter my feed and increase the odds of productive loafing, but my general feed has become a sometimes scary, ugly thing, closer to a stroll down my neighborhood expressway. Soon, I’ll sit down on the side of the road and do some curating.This week, however, I’m contemplating the possibility of some kind of twitter muse because I cannot fathom the odds of my logging in just as this tweet appeared.

Jason is like an old camp friend, who I know from the month we spent in the Banff Centre Literary Journalism Program. Nussbaum is the TV critic for the New Yorker. I don’t know her, but I shared her suffering at HBOs ending of Enlightened, so I feel a certain bond. And Grace Paley is, pretty much, my favourite writer.

As testimony I offer the above sketch, from the cover of her collected poems Begin Again. I did this that summer I decided to finally learn how to draw (and enjoyed this exercise so much, I don’t think I’ve ever drawn anything since.)

Paley is best known as a much anthologized short story writer, but her stories seem so autobiographical at least one has been listed as an essay. I was fortunate enough to interview her when she visited Montreal for the Blue Metropolis Literary Festival, and I suspect she identified mostly as a poet, but this is just a hunch.

Whatever she is, I was in:

And so was Emily,

@JulietWaters It’s true. There should be a whole Tweet Grace Paley Day. The maybe one for William Blake.

Next exit Wikipedia, where I discovered Grace Paley’s birthday was December 11. (Blake’s was November 28. I love him too, but not enough to have spent American Thanksgiving as the lonely Canadian tweeting to tigers on turkey day.) This seemed like a great day to declare a sort of pre-Christmas virtual holiday on which to honour the writer who inspired me to be a writer, and gave me advice I have tried, though too often failed, to follow. “Keep a low overhead, and never live with anyone who doesn’t respect what you do.”

So, if you hear from me on Twitter over this week or next, it’s probably because you seem the kind of person who might be interested in participating in this project with me. I don’t expect anyone to take the day off. But if you want to take an hour off to read a story (or even a half hour, some of her stories are very short), or even just a minute to read a tweet, I’ll be there.