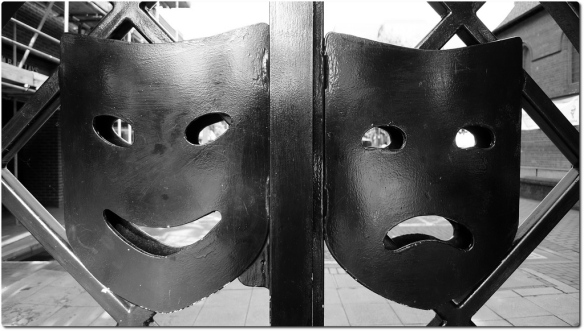 In his book Emotion: The Science of Sentiment, British evolutionary psychologist Dylan Evans argues that one of the things that distinguishes us from animals is that we are the only species that has invented artificial technologies to alter our moods. The first of these was language. “Our ancestors probably consoled each other with hugs and caresses long before they learned how to  talk, but once language was invented they found a new way of providing consolation by offering words of sympathy and advice.”

With the invention of writing we started find other new ways of consoling others, and eventually even ourselves. As Evans points out, the idea that our thoughts can influence our emotions goes back to Aristotle.  But as we look down the long road from Aristotle to gratitude journals and kitten posters, he’s obviously very far from the last person to believe this.

Of course humans didn’t only use writing to console ourselves. We’ve also tried to use it to control ourselves. It makes so much sense.  Thoughts influence our emotions.  Writing gives our thoughts permanence. So, writing should be able to give our emotions permanence. Or to be honest about what we really want, it should be able to make one emotion permanent: happiness.

New books are published every month about how to use writing to make you happier. If you’ve ever undergone cognitive therapy for depression you’ve experienced the relief of understanding, finally, what was missing from your eight years of talk therapy.  Fifteen minutes of daily writing.  You didn’t need that psychotherapist probing your memories and denials.  You just needed to write down your negative thoughts, and replace them with more rational ones.  Your brain is smart. How could it not realize the folly of  this constant flow of irrational  frustration and negativity?

And yet, if this works, it seems to only work for as long as you want to keep doing it. Unless you’ve had the good fortune to  experience a language disabling stroke, like neurologist Jill Bolte Taylor,  you may have noticed that your brain remains remarkably and curiously  stubborn in its insistent tendency to feel unpleasant things, and accompany these unpleasant feelings with unpleasant thoughts.

About the only thing as long as our history of believing that writing can change our mood, it our history of becoming disillusioned with writing as a way to change our mood. As Evans points out, writing may be one of the slowest and least effective ways to become happy. And so “humans have constantly sought to discover other technologies of mood that might provide a faster and more secure short cut to happiness than words alone.”  If you want writing to permanently alter your mood, probably the only writing for that would be a signature on a prescription.

Evans takes this  a little farther. He wrote his book at the turn of the millennium,  while he was a research Fellow in the Department of Philosophy at King’s College London, and also moonlighting as a D.J. In the chapter “Short Cuts to Happiness” he gives a lucid and interesting of summary of the various different technologies humans use to improve their moods, from color to music, and from anti depressants to meditation. Then he ends with his personal favorite, dancing and taking drugs. And true enough, if your goal in life is to change your mood for the better, writing will never compare with the speed and intensity of dosing on ecstasy while drinking smart drinks and getting holistic massages.

If language was the first technology we used to artificially change our moods, it was probably the first technology we invented that, in time, actually seemed to make our moods worse (and wouldn’t it be nice is raves were the last!)  Before language, humans felt fear, followed perhaps with a silent grunt. With language each stab of fear was accompanied with a potentially misleading headline like:  “THIS MIGHT KILL YOU!”   Hear that inner headline enough times , and it’s not surprising human history tends to be a violent one.

But trying to change our moods by changing our thoughts is probably about as useful a strategy as changing world events by legislating that headlines should have a more positive spin. The problem is that our brain is only doing what’s it’s designed to do.

It’s designed to get us to pay attention to our emotions, and so like a highly ambitious blogger, it has figured out that the key words “fat”, “loser” and “fucked” work a lot better than more reasonable, even more accurate, phrases like “slightly, but not dangerously overweight,” “average person over concerned with failure”, and “crisis, which if you were Chinese would also mean opportunity.” Our brain, or certainly one of the strongest parts of the brain, the amygdala, wants hits. So it pitches the stories it attaches to our emotions accordingly.

So now we find ourselves in this weird time in civilization where our brain is increasingly hooked up to other brains as they write their raging reddit approval seeking stories, or relentlessly chart their bland routes to happiness. Online readers seem to be increasingly helpless in the face of this onslaught of questionable mental energy.

I’ve spent years keeping messy stream of consciousness journals, and the one useful thing I’ve learned from this practice is that much of  what goes on inside my brain is, essentially, just bad writing. (I find it easy to accept that this is also true of others.  There are days, however, when I am feeling the weight of so much of this bad writing being outside of our brains.)

Interestingly, the newer schools of cognitive therapy seem to be coming to that conclusion as well. Third Wave cognitive therapy concentrates less and less on trying to replace thoughts, or reason with thoughts.  It works on simply accepting that most of our thoughts are and always will be negative, and  a little lame.  The newest of these therapies is known as Acceptance Commitment Therapy (ACT).  Developed by cognitive therapist Steven Hayes, it is rooted in Buddhist mindfulness techniques.   At the core of ACT’s philosophy is the idea that merely accepting that the human brain is in a constant state of emotional and cognitive flux unburdens us from the emotional stress of constantly trying to control it.

ACT has a lot of  interesting strategies for dealing with the relentlessly primitive thoughts coming from our brains. One of them is the effective use of irony. For persistently negative, immature thoughts, Hayes recommends the “mental T-Shirt.” Instead of trying to debate your brain next time it calls you a loser, merely appropriate this label by visualizing yourself in your “Loser” T-Shirt.  The goal of this trick is to develop the habit of recognizing a thought as just a thought and moving on. (I find this works equally well with useless obsessions. My “Fucking Goldman Sachs” T-Shirt is currently in my mental laundry hamper, though I’m sure I’ll be wearing it again.)

In The Happiness Trap, Australian ACT therapist, Russ Harris, cites research that shows that about 80 percent of our thoughts have some degree of negative content. Harris compares the average human brain to a  tabloid press constantly following us around looking for evidence of our deficiencies and weaving must read stories from these.  In dealing with our minds we have to decide if we want to be  Sean Penn or Julia Roberts. Is it worth our time to be in a constant battle with it. Or is there a way to simply get used to that reality, and go on about our day, and our life?

Does this mean that writing can’t be used to improve our lives, or increase our happiness?  No. Of course it can.

Writing can help us start thinking of happiness  as the feeling that sometimes comes over us when we’re living a complex, rich, interesting life; when we’re taking consistent action towards things that are important to us–whether these are the basics like friendship, family and work, or the higher pursuits like meaning, and spiritual and intellectual challenges. Writing can help us understand that real happiness necessarily incorporates all the frustrations, anxieties and disappointment that are part and parcel of living a full  life.

But while it’s okay to use writing to take the edge off a persistent, or overwhelming moods, for the love of god we have to start saying no to using writing as a way to nail these moods to the ground.